You Think Football Is Bad?

People say there is nothing like football in the South, from the rivalries to the tradition and the passion, there is just nothing like it.  Well take a little journey across the Atlantic Ocean to Egypt and you will find their situation is no joke.  In a Washington Post article Egyptian police deal with soccer protesters  in the capital city of Cairo.  The riots started Wednesday, February 1st in the city of Port Said in which 74 people died making it the worst soccer riot in 15 years. Fans were stabbing one another and undressing them and throwing them off of the bleachers, it was madness.   The riots after the soccer game have spurred political unrest as protesters marched to the Interior Ministry to protest the militaristic rule of Egypt a 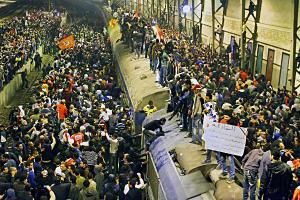 nd are even vying to have the elections moved up 2 months.  The nation of Egypt is in a state of unrest, but is all of this the result of a soccer match? The riots have continued for 3 days and since the initial riot there have been twelve more deaths.

I understand why Egyptians are unhappy about the current political situation, but why the stabbings at the soccer game? Sure, football fans can go overboard, take the poisoning of the tree at Toomer’s Corner for instance. Crazy? Of course, but did anyone die? Heavens no. Yes you can go as far enough to say school such as Alabama and Auburn, or Ohio State and Michigan hate each other, but nobody kills anybody. I cannot think of reasoning for fans to kill one another unless of course there are different political views causing the two fan bases to hate each other. However I have not read that anywhere, so that hardly seems to be the case. What causes such deadly riots in Europe and other areas such as Egypt among soccer fans? Why do they resort to stabbing each other and setting things on fire? Who knows, but there is something like football in the South and it is soccer riots across the globe.