Was Prayer In School Ever A Subculture? 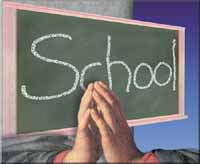 “Was it ever cool to pray in school?”

When we think of prayer in school, I think people probably think of a long gone tradition that existed just before the brink of America’s so-called enlightenment of separation of church and state.  Was prayer in school ever a subculture of school or was school a subculture of prayer in school?  That last statement was just a play on words to get you to think about it.  But in all due seriousness, whatever happened to that part of our school culture and what role did it ever play in the development of our current train of thought for education.

A really good article or web page briefly titled “School Prayer In America” at http://www.schoolprayerinamerica.info/ states a brief but concise role of the church and prayer in school.  Who the author is, is unclear, but the facts makes you wonder about our past history of school and prayer in it.  In fact church and prayer in school were a main part of our American school’s culture years ago.  It eventually dwindled down into a subculture, and then finally it seems like it has gone underground.  According to the article, “The schools continued to be run mostly by Christian Churches until the 1890’s at which point States started to take control of the exising schools.”  The article further goes on to denote how the serperation of  church and state finally reached its penacle in 1962 when the Supreme Court again declared that prayer in  school was unconstitutional.  Evolution was then taught and prayer in school was lost.

So back to the original question, was prayer school ever a subculture?  At first it was the culture and then it became a subculture.  Today I believe that subculture still exists, but on the “down low” in schools.  People still discuss prayer and religion at school functions and  meetings.  At our school alone there are several religious based groups sanctioned by the school officially or unoffically.  I am still not quite sure how to state that fact.  I am sure that they pray in school, maybe not during class but on school grounds.  Thus the subculture in school is again reborn.

Prayer in school is an old issue but an important one.  I know many would disagree with me, but that is their right as an American.  The subculture that prayer in school has become has fallen into the backround but still exists.  Will it ever become a main part of our culture ever again?  We do most of our learning at school, so why not learn how to pray and to have morals at school?  It would not hurt, or at least it might even help.  I know not all people believe in the same thing religiously, but neither do they politically, but back to my main point.  This is why prayer in school was and still is a subculture.  It is a spinoff of what once was.  It is still cool to pray in  school, just do not let anyone in charge see you.  They might think you are being unconstitutional.

6 responses to “Was Prayer In School Ever A Subculture?”